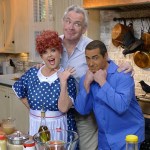 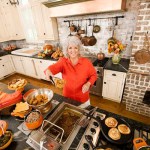 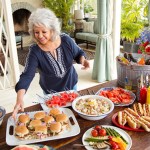 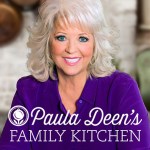 Uh, what? Paula Deen is no stranger to racial controversy so what could have possessed the former-Food Network star to tweet a picture of her son, Bobby Deen, in brownface? The photo upset a lot of people, who took to Twitter to ask — what was Paula thinking?!

Paula Deen’s in hot water again! It’s been two years since Paula, 68, was kicked off the Food Network for using racial slurs, but the scandal still surrounds the disgraced celebrity chef. She better get ready for new round of controversy! People were outraged after Paula posted a picture that showed her standing next to her son, Bobby Deen, 45, after she had him dress up in brown-face!

Some pictures should remain unseen, as Paula is now learning. She tweeted the controversial photo on July 7. In the now-deleted tweet, Paula appeared dressed up as legendary actress, Lucille Ball, while her son was supposed to be Lucy’s husband, Desi Arnaz. Desi was born in Cuba, and for some reason, Bobby thought it was appropriate to darken his face to look like a Latino.

“Lucyyyyyyy! You got a lot of esplainin’ to do! #TransformationTuesday,” Paula captioned the photo, tagging Bobby’s twitter account. Paula clearly has some explaining to do, as to why she thought it was okay to share this photo with her 1.38 million followers.

The photo is reportedly from Paula’s 2011 Halloween special, reports Page Six. That means it was taken two years before she was a target of a lawsuit that accused her of using derogatory racial remarks towards African Americans. Paula admitted she used the n-word at times, and this caused Food Network to not renew her contract!

After she lost so much money and countless fans over that lawsuit, it’s mind-boggling that she would share this picture. It certainly confused people on Twitter, who had to ask — what was she thinking?

Did Paula Deen learn nothing…?

Paula Deen didn’t really do something that stupid, did she? Oh, wait… never mind.

The other other crazy thing about Paula Deen’s pic is she either ignored a lot of advise, or nobody around her told her the truth.

What do you think about Paula’s photo, HollywoodLifers? Can you believe she shared this photo after all she’s been through?