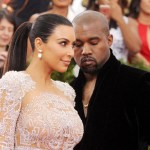 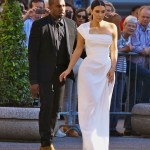 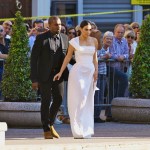 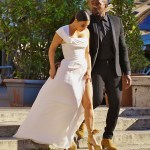 Kim Kardashian just couldn’t help herself from gushing over Kanye West on ‘Man Crush Monday!’ But was it maybe a bit too soon to flaunt her love, given poor Kourtney is devastated over her split from Scott Disick?

Rubbing it in her face, are ya Kim? The reality star shared an adorable pic of Kanye smiling — yes, smiling — and captioned the pic “#MCM.” Well, it’s good to know that even though Kourtney and Scott’s relationship hit the fan, things are still going well in Kimye land!

We wouldn’t blame Kourt if she thought Kim’s pic was a tad insensitive. Kourtney made the difficult decision to end things with Scott after his rowdy behavior became too much for her to handle — especially when he wasn’t there to take care of their kids. Scott quickly soaked up single life fast since Kourt dumped him. He got cozy with his rumored ex, Chloe Bartoli, in South France, partied with teen girls in Miami, and cuddled up with another mystery brunette in a drug-filled room. While he seems to have full on reverted to his bad boy ways, Scott is 100 percent convinced he can get Kourtney back whenever he wants. We’re not so sure about that.

Despite Kim’s man crush Monday pic, she’s been totally there for Kourtney as she battles her heartbreak. When Scott left Kourtney fully responsible for their kids while he partied over Fourth of July weekend, Kim helped her sister out by taking Mason Disick along to New York City with her, Kanye and North! Judging from the pic, it looks like Mason had a blast.

What do YOU think, HollywoodLifers? Do you think it was insensitive of Kim to post the Kanye pic? Let us know!