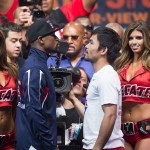 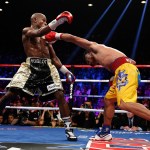 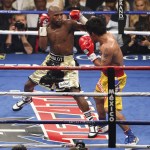 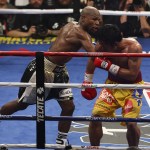 They man they call ‘Money’ has a little less bling, as Floyd Mayweather has been stripped of the WBO Welterweight Title! Floyd failed to follow the WBO’s rules and it cost him his championship. This decision has Floyd seeing red, as he called the action a ‘disgrace’ to boxing!

Wow. Floyd Mayweather, 38, looks good, like he’s dropped some weight — about 10-15 pounds of championship gold! The World Boxing Organization took away his welterweight title because Floyd refused to obey the WBO’s strict regulations. And, oh boy, the undefeated Floyd is not pleased that he’s no longer the champ!

Floyd won the WBO welterweight title when he beat Manny Pacquiao on the historic May 2 bout, reports ESPN. However, the WBO rules say that boxers can not hold world titles in multiple weight classes, and Floyd had two junior middleweight champions when he won the welterweight title.

Floyd had until 4:30 p.m. EST on July 3 to vacate the two other belts and pay a $200,000 sanctioning fee (from the fight where Floyd was paid $220 million.) Floyd blew off the deadline, leaving the WBO no choice but to vacate the title on July 6.

“It’s a complete disgrace,” Mayweather Promotions CEO Leonard Ellerbe told ESPN.com about the WBO’s actions, adding that “Floyd will decided what, or if any, actions he will take. But in the meantime, he’s enjoying a couple hundred million he made from his last outing and this has zero impact on anything he does.”

Leonard also said that Floyd “has a great deal of respect” for all the organizations he fights for, “but he will not be dictated to by any organization or person as it related to his decision making.”

Well, to be fair to the WBO, they reportedly gave him two months to make a decision, when they normally give other fighters 10 days to figure out which weight class they want to hold a title in. Plus, the WBC and WBA have also reportedly allowed Floyd to hold titles in multiple weight classes. This is the first time a boxing organization actually made Floyd obey the rules, and he clearly isn’t happy about it!

Floyd seems to be on a losing streak. Not only did he lose his fight against the WBO, Rihanna got the better of him at the BET Awards on June 28. While they were sitting in the audience, RiRi wrapped Floyd up in duct tape! She did what 48 other fighters couldn’t do and shut Floyd’s mouth, as Rihanna planted a final piece of tape across his lips. We guess that’s not the ‘Money’ Rihanna is looking for.

What do you think about the WBO’s decision, HollywoodLifers? Do you think it was fair, or should they allow Floyd to hold titles in two weight classes?