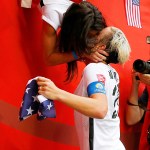 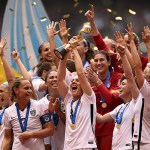 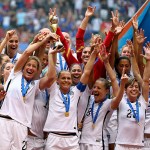 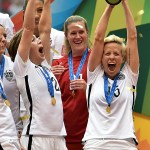 U.S. soccer star Carli Lloyd was the star of the Women’s World Cup finals…but she could’ve told you weeks ago that would happen! After scoring three goals during her team’s HUGE win against Japan on July 6, Carli revealed she actually predicted her clutch goal-scoring back in May.

Carli Lloyd, 32, made history on July 6, by completing a hat trick just 16 minutes into the Women’s Soccer World Cup Finals, but before the game, she actually thought she’d score even more than that! In all their other games in the tournament, the USA never even scored three goals total, but Carli said she just knew she’d have a big game in the finals — and that was weeks before play even started!

“[I visualized myself scoring] four or five,” she admitted on Good Morning America. “Just one day, running, I got my headphones in and I’m just visualizing stuff, getting super excited for the World Cup. I think this was back in probably May. It’s just crazy what the mind can do.

The captain and her team wound up winning the finals against Japan 5-2, taking home their first World Cup title since 1999, and truly making history. “We didn’t come here to take second place, we came here to win it,” Carli explained. “There was something different in the air these last few games with our team. I think we all believed. We knew it, we felt it. And what a convincing win today to get it done!”

And Carli was certainly rewarded for her epic role in securing the team’s win — the soccer star was awarded the Golden Ball, which goes to the ‘best player.’ And this isn’t the first time she’s come in super clutch, either: She scored winning goals in the finals of both the 2008 and 2012 Summer Olympics. Talk about someone who can handle those high pressure situations!

HollywoodLifers, tell us: Did you believe Carli would be the team’s clutch player before the game?