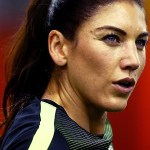 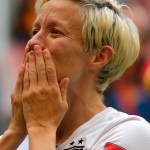 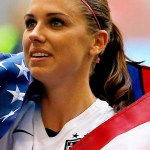 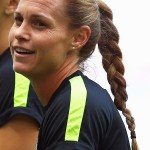 Team USA kicked butt as they defeated, well, everyone, and took the World Cup on July 5. The women’s team rocked some cool hairstyles that are easily to re-create, on and off the field!

Whether you’re planning to spend your summer in cleats, in the pool or at the mall, these sporty hairstyles work on everyone for every day! Braids, ponys and cute pixies, seen on members of the United States women’s national soccer team, are fun and festive! Get the looks below.

Goalie Hope Solo, 33, rocked her hair in a high pony as she earned her Golden Glove trophy. The athlete also wore a bit of eye makeup on the field, specifically mascara to make her gorgeous green eyes pop.

Megan Rapinoe, 30, styled her platinum pixie in a deep side part. She had just a hint of dark roots showing, which gave her hairstyle even more of an edge! This is truly a look maintenance look when you’re running for hours!

Christie Rampone, 40, pulled her hair into a high ponytail and then braided the tail and secured with an elastic.

Forward Alex Morgan, 26, rocked her shiny brown hair in a high ponytail. To keep any stray hairs or layers out of her face, she used a thin strip of hot pink pre-wrap as a headband.

Julie Johnston also wore her hair in a ponytail with a thick blue pre-wrap headband.

Congrats to the women’s soccer team on their World Cup victory — see more hairstyles in the gallery.