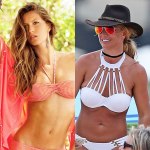 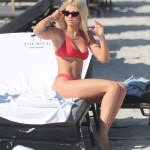 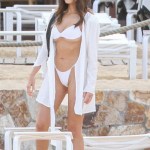 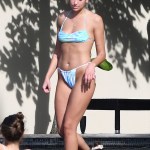 It’s a battle of the former Disney Channel beauties! Vanessa Hudgens and Bella Thorne pulled a fashion faux pas and both stepped out on the 4th of July in the exact same bikinis, but who wore the stars and stripes swimsuit better?

The 4th of July brings out the inner patriot in all of us and celebrities are no different! No red, white, and blue attire was the same on the patriotic holiday until Vanessa Hudgens, 26, and Bella Thorne, 17, both Instagrammed themselves in the exact same red, white, and blue one-piece. Awkward!

At least they weren’t in the same place wearing the same thing — imagine how much more awkward that would’ve been! Both Disney sweethearts seemed to have celebrated the 4th of July in completely different places. Bella showed off her figure in the revealing American Apparel one-piece on the beach as she celebrated Independence day with her ‘Independent Women‘ and boyfriend Gregg Sulkin, 23.”Happy Independence Day,” the 17-year-old wrote along with her patriotic ensemble.

Meanwhile Vanessa wore her star spangled bikini as a top underneath high-waisted shorts with a denim jacket at the Monument Valley, Utah. She accessorized her look with an additional blue, star patterned bandana tied around her neck. V declared her love for the beautiful country with a message attached to her Instagram photo. “HAPPY 4th OF JULY LOVERS!!!! Coming at cha from Monument Valley. America is so beautiful. Has so much to offer and I’m proud to call it my home. America, America, God shed his grace on thee,” she wrote.

It’s so hard to choose between the two since they both wore it so differently! But, it goes to show the American Apparel bikini is very versatile piece to addition to your wardrobe!

What do YOU think, HollywoodLifers? Who wore the American flag bikini best?