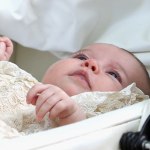 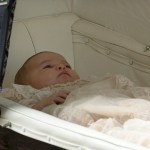 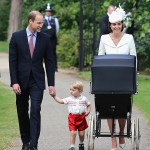 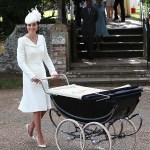 Look, it’s the whole royal family! During Princess Charlotte’s christening ceremony on July 5, Kate Middleton, Prince William, Charlotte and George made their first public appearance as a family of four!

Princess Charlotte’s christening was a very special day indeed. Royal fans have long-awaited seeing the royal foursome — Charlotte, Kate Middleton, 33, Prince William, 33, and Prince George, 1, — together as a family, and on Charlotte’s big day it finally happened! The royal family of four were pictured together at the Sandringham House during Charlotte’s lovely christening ceremony on July 5, looking their very best!

Will, Kate, George and Charlotte were all smiles for the christening, which took place at the estate where Will’s mother, Princess Diana had her christening in 1961. In the adorable family pic, Kate looks beautiful in white as she pushes Charlotte’s stroller, while George holds onto Will’s hand. So cute! (Side note: how fabulous are those little red shorts?)

It’s great to see the family of four all together! We absolutely love seeing Charlotte and George together especially. George is fascinated by his baby sis, and we of course remember how sweet he was with her in Charlotte’s first royal portrait!

Charlotte’s christening ceremony was beautiful and full of royal tradition. She wore the same christening garment George wore for his christening, which is a replica of the traditional lace garment made for Queen Victoria‘s first child in 1841.

Princess Charlotte’s five godparents attended the ceremony, who include Tom van Straubenzee, a key part of Will and Kate’s 2011 wedding, James Meade, a classmate of Will’s at Eton College, Sophie Carter, a friend of Kate’s, Laura Fellowes, the daughter of Princess Diana’s sister, and Adam Middleton, Kate’s cousin.

The royal foursome will be posing for their first official portrait as a family of four, following the christening.

What do YOU think, HollywoodLifers? Were you excited to see the royal family of four together? Let us know!