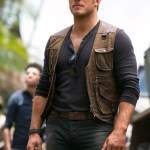 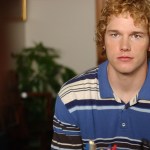 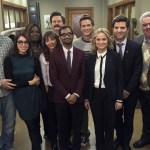 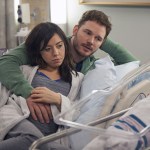 Ummm, does Chris Pratt have magical powers to predict the future? A video of him doing a behind-the-scenes extra for ‘Parks and Recreation’ resurfaced, where he jokes about starring in ‘Jurassic World’ — five years before the film’s release! Whoa.

Either Chris Pratt, 36, is psychic or this is just a bizarre coincidence. While shooting a funny behind-the-scenes extra for season two of Parks and Recreation in 2010, Chris makes a joke about getting a text from Jurassic Park director Steven Spielberg about starring in the next installment of the sci-fi franchise. Lo and behold, five years later, Chris starred in the highly successful sequel Jurassic World!

Before hunky Chris was fighting dinosaurs, he was adorkable Andy Dwyer on Parks and Rec, who clearly had a talent for predicting the future. In the behind-the-scenes extra filmed for the DVD, Chris says, “Hi. My name is Chris Pratt and I’ll be shooting footage behind the scenes for Parks And Recreation.” His phone then buzzes.

“Man, I just got a text message. From Steven Spielberg. God, so annoying,” he says while looking down at his phone. He types his response while reading aloud, “Sorry Steven, I was asked by parks and recreation slash NBC to do behind the scenes, which is to say everyone else was asked and said no. I’ll have to get back to you later about Jurassic Park 4. Boom!”

Well, flash forward five years and he DID in fact star in the fourth film of the franchise —  and absolutely killed it! We have to say, it’s pretty ironic that he joked about this and it became a reality.

Chris Pratt Confirms He Will Return For ‘Jurassic World’ Sequel

Chris’ success in Jurassic World will actually land him plenty of more movies in the franchise, too. We’re sure 2010 Chris would be super proud. The actor confirmed that he was singed on for many sequels in a recent interview.

“They have me for I think 38 movies or something,” Chris told Entertainment Weekly. Thirty-eight might be stretching it, but we will take all the Chris we can get!

What do YOU think, HollywoodLifers? Are you shocked that Chris predicted his future? Let us know!