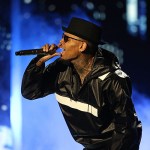 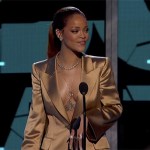 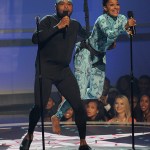 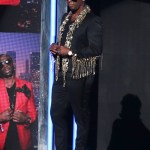 Chris Brown won two huge awards at the 2015 BET Awards, and gave such a sweet shout out to his daughter, Royalty! However, it may have been awkward with his exes, Rihanna and Karrueche Tran in the audience!

Chris Brown has gone through a lot, and he knows it — so the BET Awards were definitely a good chance for him to thank everyone who supported him. When winning both the Fan Award and the Best Male R&B/Pop Artist Award, he said that he was “most thankful” for his daughter, Royalty.

I ain’t good with speeches. A lot has changed in my life, a lot of mistakes, a lot of lessons learned. The best thing, I’m most thankful for is my daughter. At the end of the day, love is love. I love everybody. My fans, when I was in jail, ‘Loyal’ was number one. Last year, I was fat on this stage, dancing, trying to get my stuff together but right now I can only say I’m so thankful and happy to have the loyal fans in Team Breezy right now, because without y’all, I can’t do my music. Everyone that’s here that know me, to know me, is to love me. If you ain’t with us, so what? I love y’all.

First of all, we have to say — he wasn’t fat last year, just not as buff as he is today! Anyway, we absolutely love that he gave a shout out to his daughter. We know that his ex, Karrueche Tran, and his other ex, Rihanna were both in the audience, but it’s important that he’s proud of his little girl.

Plus, Chris had a huge night! In addition to the wins, he also performed his new song, “Post To Be”, then joined Meek Mill and Nicki Minaj during their performance of “All Eyes On You” and joined in on the Bad Boy reunion!

Were you surprised that Chris thanked his daughter at the BET Awards? Let us know.