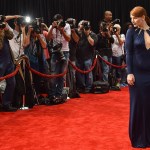 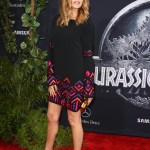 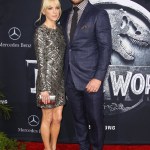 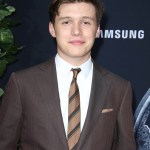 Chris Pratt, Anna Faris, and more stars conquered the red carpet at the ‘Jurassic World’ premiere on June 9, looking dino-mite! Check out our red carpet gallery and let us know who you think looked best.

As we anticipate the June 12 release date of Jurassic World, for now we can feast our eyes on the sizzling stars at the premiere for the film on June 9 in Los Angeles. From Chris Pratt, 35 and Anna Faris, 38, to Sofía Vergara, 42, and Joe Manganiello, 38, the premiere was a star-studded event with everyone bringing their fashion A-game!

hris and Anna were arguably the most sizzling couple on the red carpet. The star of the flick brought his real life leading lady to the premiere, who stunned in a metallic mini-dress while Chris towered over her wearing a sharp blue suit. Chris also showed off some major eye candy by rocking a Chopard watch. Sofia and Joe were another smoking hot couple on the carpet, Sofia opting for a classy black dressed with embellishments around the waist and on the bottom. She can seriously rock anything! Meanwhile, we were loving Bryce Dallas Howard‘s sexy, dramatic look. Wearing a floor-length navy blue dress which revealed her cleavage, she tied her red locks back into a pony while wearing a bold plum colored lip. So stunning!

Other stars on the carpet included Judy Greer, Lauren Lapkus, Lindsey Vonn, Nick Robinson, Brian Tee, Greer Grammer, Maria Menounos, and Camille Belle. There were so many top-notch looks it’s hard to pick which one we liked best!

Jurassic World picks up 22 years after the events of the 1993 film, Jurassic Park. Isla Nublar now features a dinosaur theme park, Jurassic World, but after 10 years of operation, visitation declines and in order to fulfill a corporate mandate they put in a giant new attraction called the Indominus Rex…which backfires horribly!

HollywoodLifers, who do YOU think looked best at the Jurassic World premiere? Vote in our poll and tell us below!