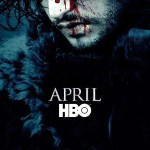 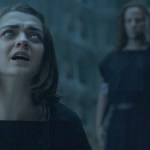 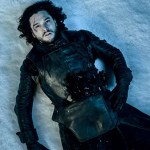 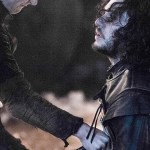 Who else is still trying to pick their jaw up off the floor? On the May 24 episode of ‘Game of Thrones,’ two of the show’s most iconic characters met for the first time in five seasons. It was EPIC!

Game of Thrones is in the back half of season five, and the show is pulling out all the stops now. On the May 24 episode, Sansa (Sophie Turner) tried to fight back after Ramsay’s (Iwan Rheon) brutal rape, one Sand Snake nearly taunted Bronn (Jerome Flynn) to death, Cersei (Lena Headey) got a heavy dose of karma and two of the show’s most beloved characters finally came face-to-face in a game-changing scene!

Jon Snow (Kit Harington) and Tormund Giantsbane (Kristofer Hivju) headed off together on a mission, but before Jon left, Sam (John Bradley) gave him a piece of dragonglass for safe-keeping. You know, in case he came face-to-face with a White Walker. After Jon ventured off, Sam and Gilly (Hannah Murray) watched over Maester Aemon (Peter Vaughan) in his final moments. Sam gave a sweet eulogy at his funeral, but Alliser (Owen Teale) had to go and be a total prick by telling Sam, “You’re losing all your friends, darling.”

Later, two men cornered Gilly and were about to do very unkind things to her before Sam stepped in. He took a brutal beatdown for Gilly and even threatened to kill the two men. Thankfully, before this escalated, GHOST popped out to save the day! Gilly thanked Sam for his valiant efforts later by making love to him.

Over in Winterfell, a bruised and scared Sansa pleaded with Theon (Alfie Allen) to help her after Ramsay unleashed his wicked ways on her. Theon, who has literally been reduced to a shell of a man, told Sansa to do as Ramsay said. After all, it could always get worse. Sansa wasn’t going to take no for an answer. She wanted him to light a candle in one of the towers to signal Brienne (Gwendoline Christie) and Podrick (Daniel Portman) that she needed help.

Theon headed to tower, and it truly looked like he was going to actually do the right thing for once, but Ramsay had already set up shop there. Ugh, Sansa has the worst luck ever. Later, Sansa and Ramsay discussed their future together. He claimed he would be Lord of Winterfell sooner or later and Warden of the North. Sansa was quick to remind him that if his stepmother had a boy, his claim to the throne would be usurped because he was ultimately a bastard.

Ramsay quickly transitioned this discussion into one where he controlled the situation. Apparently, Theon told Ramsay that Sansa wanted to leave. In response to those claims, Ramsay savagely killed a poor, innocent woman.

The symmetry between Ramsay and Joffrey is becoming more obvious with each passing episode. These two characters are diabolical and totally irredeemable. Ramsay’s always been bad, but he’s reaching Joffrey levels of hatred. I’m not entirely sure which one is worst. Hopefully Ramsay will end up dead like Joffrey.

‘Game Of Thrones’ Recap: THE GAME-CHANGER

Stannis (Stephen Dillane) was ready to take his men to Winterfell, but Davos (Liam Cunningham) strongly advised against it. At this point, Stannis was willing to risk everything for fear of looking weak. “We march to victory or we march to defeat,” Stannis said. He turned to Melisandre (Carice van Houten) for more words of advice. He’d been following her visions, and he wanted to see the end result. Melisandre assured him everything would go as planned, but then dropped the bomb that he should sacrifice his own daughter to ensure his victory.

Jorah (Iain Glen) and Tyrion (Peter Dinklage) finally made it to the slave auction. Jorah was easily sold, and Tyrion was not about to get left behind. He pleaded with the buyer to buy him as well. He and Jorah were a team. To prove his worth, Tyrion beat the daylights out of some poor soul beside him. And it was just their luck that Tyrion and Jorah would be fighting in front of the queen — DAENERYS!

Before Daenerys (Emilia Clarke) had her first taste of the fighting pits, she indulged in some sexy time with Daario (Michiel Huisman), who was feeling a little jealous about her planned union with Hizdahr. How could anyone resist Daario’s charm? Jesus.

Daenerys took her place before the pit. Jorah and Tyrion were kept behind as a slaughter took place. Jorah knew this was his chance. He left Tyrion and went out to fight. Jorah defeated everyone in the pit and revealed himself to Dany. “Get him out of my sight,” Daenerys seethed. He yelled to her that he had a gift.

THAT’S WHEN TYRION WALKED OUT. YES, IN FRONT OF DAENERYS.

“I am the gift,” Tyrion said. “It is a pleasure to meet you, your grace. My name is Tyrion Lannister.”

Jaime (Nikolaj Coster-Waldau) was still locked away in Dorne after attempting to rescue Myrcella (Nell Tiger Free). The funniest thing about the whole situation? Myrcella didn’t want to leave Dorne. She was in love with Prince Tristan and wanted to marry him. Well, Jaime’s trip was a total waste. Meanwhile, Bronn had a front row seat to the Sand Snakes in his cell.

After Bronn went on about how he’d seen more beautiful women elsewhere, Tyene (Rosabell Laurenti Sellers) started stripping fully naked in front of him. All of a sudden, his nose started bleeding. The dagger she’d cut him with was coated in poison. She was the only one with the antidote. She made him say she was the most beautiful woman in the world before handing it over. Damn.

It was about time Grandma Tyrell (Diana Rigg) showed up in King’s Landing! Olenna went straight to the High Sparrow about Margaery (Natalie Dormer) and Loras (Finn Jones). No matter what she did, her grandchildren would be punished the same way as anyone else. He wasn’t afraid of her whatsoever. She paid a visit to Littlefinger (Aidan Gillen) and warned him that their fates were forever lined. If he had any part in her grandchildren’s arrests, she would make him suffer. Littlefinger had someone that would definitely pique Olenna’s interest.

That person was Lancel Lannister (Eugene Simon). After Cersei had taunted Margaery, she visited the High Sparrow. He told her that a young man had come to him broken and burdened with tons to say about her. Karma reared its ugly head at Cersei. She was imprisoned just like Margaery!

HollywoodLifers, what did you think of tonight’s Game of Thrones? Are you shocked that Daenerys and Tyrion came face-to-face? Did Cersei get what she deserved? Let me know!