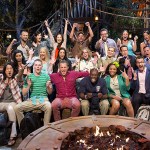 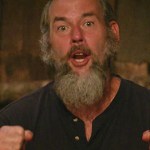 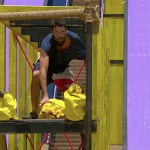 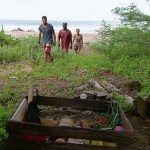 We started with 18…and now we’re down to 1! After weeks of crazy twists and blindsides, [SPOILER] was announced as the winner of ‘Survivor: Worlds Apart’ during the show’s live finale on May 20. Congrats!

It’s been one WILD season of Survivor — even in the show’s 30th go-around, they’re still managing to keep things fresh! But even after all the insanity that ensued this season, there can only be one winner. Read on to find out who was voted champion of Survivor: Worlds Apart by their former tribe mates!

And the tribe member who outwitted, outplayed and outlasted all the rest, earning the title of WINNER of Survivor: Worlds Apart is…MIKE HOLLOWAY!!

After a crazy Q&A with the jury, Mike received the majority of the final votes, giving him the win over fellow finalists Carolyn Rivera and Will Sims II.

The finale started just where the last few episodes left off: With underdog Mike Holloway on the outs from the remaining 4-person alliance, consisting of Rodney Lavoie Jr., Sierra Thomas, Will Sims and Carolyn Rivera. But the game was put a brief hold at the first reward challenge, where the five emotional players each reunited with one of their family members before competing.

Mike won the physical challenge, giving him an advantage at the next immunity challenge, which is HUGE at this point in the game (especially for the guy on the bottom of the totem pole). He also got to spend the night with his Mom, while the rest of the contestants had to say bye to their loved ones.

For his advantage, Mike got to arrive a half hour early to the immunity challenge, where the contestants have to find their way through a maze blindfolded, and get some guidance through the course by his mom. Unfortunately, her attempt at figuring the maze out was a bit of a struggle, and Mike didn’t gain much from the extra time.

Still, Mike did what he needed to do, and won the Immunity Necklace while his back was against the wall! This made him the swing vote, stuck in the middle between the girls and the guys. Ultimately, he went with the guys, and Sierra was voted out. (Did anyone else find it interesting that Carolyn “Mama C” wasn’t the target here? To me, she’s the only one after Mike who would deserve to win. Why wouldn’t he want to get her out?)

Jeff Probst Is A Boss During ‘Survivor’ Reunion

At the exhausting final immunity challenge, Mike did it again! WOW. Nobody needed that more. Mike may have just won himself the game. Except…shockingly, the 38-year-old sided with Mama C (his only competition, in my opinion. WHY, Mike? WHY?), and forced a tie between her and Rodney, meaning they had to face-off in an on-the-spot challenge to see who can build a fire first. CRAZY!

Both Rodney and Carolyn epically failed at the fire-making (something they’ve supposed to have been doing for 38 days now!) duel, but eventually, after nearly an HOUR,  Carolyn came out victorious, meaning she, Mike and Will became Season 30’s Final 3.

An intense round of questions from the jury came next, and the remaining contestants’ fate was left in their former competitors’ hands. At the live finale, host Jeff Probst finally read the votes, announcing Mike as the winner. AND SO DESERVED!!!!

Season 30 began with 18 contestants, split into three tribes of six based on their social class: White Collar, Blue Collar and No Collar, and the Final 3 actually featured one of each — Mike, a blue collar, Carolyn, a white collar, and Will, a no collar. Very interesting!

Overall, it was an amazing season with a deserving player coming out on top!

‘Survivor: Second Chance’: What To Expect Next Season

With Survivor still killing it in the ratings, the show isn’t going anywhere! It will return next fall for its 31st season, which will feature former contestants who have only played once and haven’t won.

But there was a big twist this time around, as viewers actually got to VOTE for who they wanted to see return! The 10 men and 10 women who were chosen will be revealed during the Worlds Apart live reunion show.

Check back to find out who will join the cast!

HollywoodLifers, do you think the right person won Survivor?