Bruce has received an outpouring amount of support from celebrities after confirming his gender transition on April 24, but one star decided to take a different approach in response to his revelation. Read Alice Eve’s shocking comments that has Instagram users calling her a ‘bigot’ and ‘transphobic.’

This is shocking. In an attempt to make a point about woman’s rights, Alice Eve, 33, threw some major shade at Bruce Jenner, 65, following his buzzed-about 20/20 interview with Diane Sawyer. Find out why she’s so upset that he’s calling himself, “for all intents and purposes,” a woman — and read commenters’ ranting reactions!

“If you were a woman no one would have heard of you because women can’t compete in the decathlon. You wouldn’t be a hero. You would be a frustrated young athlete who hasn’t given a chance,” the Star Trek star wrote on Instagram. “Until women are paid the same as men, then playing at being a “woman” while retaining the benefits of being a man is unfair. Do you have a vagina? Are you paid less than men? Then, my friend, you are a woman.” 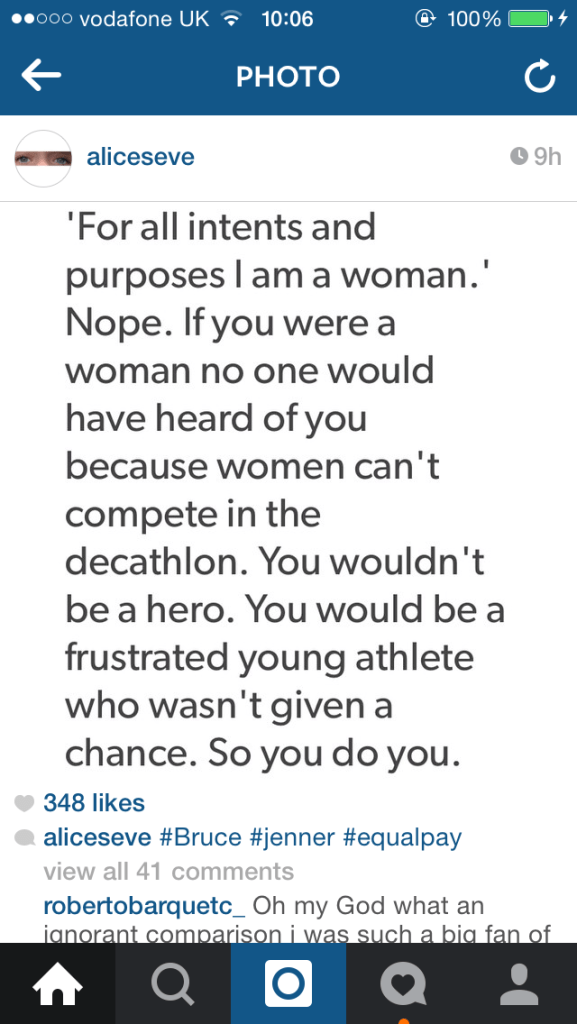 After receiving major backlash for the post, with hundreds of fans unfollowing her and many calling her “transphobic,” Alice deleted the post, and began backtracking.

“I do agree that the struggle for transgenders is unique and horrific. However, I do want to also support a cause I strongly believe in, the right for women to have equal rights to men. The transgender equality struggle is the next one, as we all know. And very real it is, too,” she wrote.

That post was eventually removed from her page, as well, and on April 27, Alice instead posted a photo of a transgender woman with a quote that reads, “I am a supporter of anyone who wishes to explore their gender identity. Sometimes language doesn’t express the spectrum of identity sufficiently, as in this case. I am also a believer in equal rights for all…Whatever your race, colour or creed.

But that didn’t stop Bruce supporters from taking to the comments section of Alice’s pic to continue criticizing her. Instagram users made their voices heard by calling the actress a “bigot” and “transphobic,” while also vowing to stop supporting her work.

“Your comments about Jenner proved otherwise,” one user wrote. “I’ve always adored you, but I can honestly say I’ll be avoiding your work from now on. I have a trans* sibling and on amount of apologies can make up for what you said.”

It looks like Alice has learned that you can’t take back something once you’ve put it on the Internet!

Kim Kardashian: How Bruce Jenner Walked Us Through His Transition

Despite Alice’s comments, Bruce has received a ton of support since making his declaration, especially from his big family. He watched the interview twice, with both the Kardashian and Jenner sides of his family, and his relatives all took to social media to publicly make it clear that they’re standing by him.

“We have each other to go through this experience with,” Kim Kardashian, 34, revealed on the TODAY Show April 27. “I’m really grateful for that. Bruce has always been really, really good at explaining everything to us. And these have been newer feelings — not newer feelings for him — but for us to digest. He’s done a really god job at walking us through it.”

The family is still learning how to adjust to the situation, though, and the reality star says they’re in therapy to help do so. “We all really support him,” she explained. “Is it a hard adjustment? Yes. Is there things we’ve learned more recently…it’s a daily process.”

HollywoodLifers, what do you think of Alice’s comments?