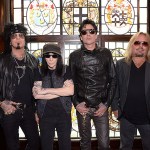 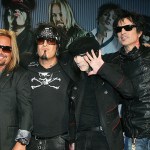 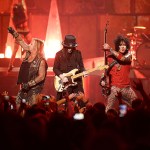 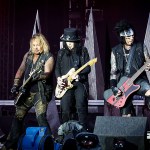 The ‘Star Spangled Banner’ — like you’ve never heard it before, courtesy of Vince Neil! The Motley Crüe frontman performed the National Anthem at an event in Las Vegas on March 30, but seemed to struggle a bit through the lackluster performance.

As the lead singer of Motley Crüe, Vince Neil, 54, is a rock legend, but it seems he needed a bit more tune-up time before his March 30 performance of the National Anthem at the Las Vegas Outlaws first United States Football League game! The rocker was led onto the field on the arms of two gorgeous cheerleaders, and appeared amped up at the opportunity to perform the “Star Spangled Banner,” but once he got a mic in his hand, things got a bit…strange.

For starters, Vince began the iconic song with his own twist, by yelling, “Here we go!” into the microphone. From there, he gave a less-than-powerful performance, and even tripped over some words while making his way through the National Anthem.

The 54-year-old was given the honor of helping to kick-off the Outlaws’ season because, well, he’s owner of the team! “I’m going to perform the National Anthem in honor of the Outlaws’ first game, for the fans and families in attendance, and for our veterans and service men and women everywhere,” he announced in a statement before the game. “The players and coaches are ready to get this season rocking’ and to make Las Vegas proud of its awesome Arena football team.”

Unfortunately, after the performance was over, fans didn’t share the same enthusiasm as Vince did beforehand, and social media blew up with comments about his rendition.

I couldn't even finish watching the Vince Neil national anthem.

Just heard THE WORST rendition of the national anthem in US history. @thevinceneil @MotleyCrue #whatisheardcannotbeunheard

Just watched a video of Vince Neil singing Star Spangled banner....he even didn't know all the words to that. Pretty bad, #smh

In January 2014, Vince’s band, Motley Crüe, announced their plans for a final International tour after more than 30 years together. “We wanna go out with the four founding members of Motley Crue and go out on top and leave a legacy of a band called Motley Crüe,” Vince told fans.

The band will wrap up their career as a group with three shows at the Staples Center in Los Angeles, with the final being on Dec. 31, 2015. They’ll hit Australia and Europe this spring, and tour North America throughout the summer.

HollywoodLifers, do you think it’s time for Vince to throw in the towel? Or did you rather enjoy his unique rendition of the National Anthem?