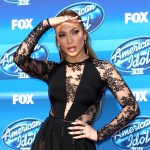 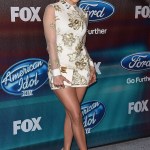 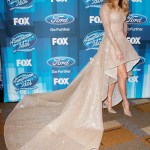 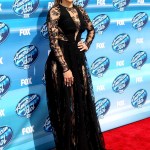 JLo looked stunning during her performance of ‘Feel The Light’ on ‘American Idol.’ Not only did she sound amazing, but her dress, which her costume designer EXCLUSIVELY told us was ‘special’ for many reasons, was like nothing we’ve ever seen before. See it here!

The Top 11 American Idol contestants took the stage on the March 19 episode of the long-running reality singing competition, but Jennifer Lopez, 45, stole the show with her gorgeous dress and epic performance of “Feel The Light,” her new song from the animated movie, Home. There’s no doubt about it — we definitely felt the light!

Jennifer first appeared on stage in a large white dress — which consisted of fabric, 20 feet in diameter — and it projected scenes from the movie, as well as some super cool special effects.

As JLo stood there and belted out every mesmerizing note, our eyes were transfixed on that dress — how fierce! Even Jennifer’s costume designer, Mariel Haenn, felt like it was something “special.”

“A lot of things made this dress special, particularly it’s an idea that we’ve had for a very long time that we were just waiting for the right time to execute it. The white dress on it’s own was an idea that Jennifer had for a performance, but then when we were working on the creatives for the Home music video, we talked about using the dress as a canvas to project stuff onto it, and incorporate the movie into her dress, which is something I’ve never seen before. It felt really special,” she told HollywoodLife.com EXCLUSIVELY.

“[Projection] is something that Jennifer has always wanted to do, and when she was working on this song and we were working on the creatives for the video, she thought that this was the perfect place for it all to happen,” she added.

In the sneak peek, JLo rocks a tight, white getup, while silver stars surround her gorgeous eyes. She also sports a knee-length braid, which she puts on full displays as she turns around to point her booty towards the camera.

We were told by Mariel that “a white short-sleeved version of the dress Jennifer wore on American Idol,” will be seen in the video. (So cool!)

Honestly, there’s not one thing JLo can’t do. She’s amazing and she’s always one step ahead of everyone else in the game.

What do YOU think, HollywoodLifers? Did you enjoy Jennifer Lopez’s performance? And what did you think of her dress? Tell us how you feel!