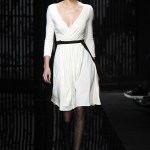 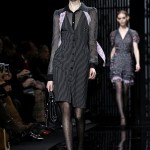 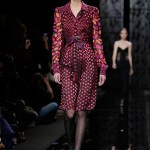 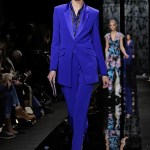 Hooray for Diane, who understands the style needs of 2015’s working woman as well as she did in 1974, the year she first gave the world her famous wrap dress.

It’s been 41 years since American women first fell in love with the Diane von Furstenberg wrap dress and ironically, that dress is just as perfect today as it was then. While the world has changed in many ways, America’s working women have come full circle in their style needs.

Since 1974, we have survived the era of dressing in menswear-inspired pantsuits, then in power skirt suits, then the era of black minimalist dresses and pants. Finally, we’ve moved confidently back to dressing like women again in shapely separates and dresses.

In fact, dresses have become many busy women’s go-to, everyday uniform. There’s nothing quicker to slip into or more figure-flattering than the right dress.

Thankfully, Diane understands this reality of life for most women today. They have demanding careers and often demanding family lives, too. But they still want to feel confident and look their best.

She makes that easy for them with this new collection, which looks like it’s inspired by New York City’s new ambassador, Taylor Swift, 25, with her long legs and pretty working-girl style.

Diane’s wrap day dresses — whether simple white with a black belt on Kendall Jenner, 19, or with pastel printed patterns — are perfect for a day at the office and out to dinner after. Same goes for her shapely, feminized shirtdresses, especially one in bright pink, rose and ruby on black, featuring autumn leaves.

Diane even takes on the ’70s pinstriped menswear suit by reinterpreting it in a womanly way. She turns it into a shaped, slim pinstriped vest over slim trousers and a chiffon blouse. She also takes this even one step better by turning the men’s suit into a body-slimming, elongated vest dress or a striped chiffon skirt.

For evening, Diane seems to playfully have Fifty Shades of Grey‘s Anastasia Steele, embodied by star Dakota Johnson, 25, in mind.

Diane seduces with a deep, plunging red lace dress and red on black overcoat. Or she whips up a sexy red lace shirtdress and leaves the buttons undone — a look that will surely drive every Christian Grey out there wild.

It’s Diane’s genius that she has never lost her touch or became out of touch with the very of-the-moment American woman and the needs of her wardrobe!