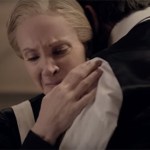 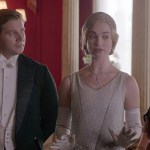 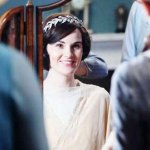 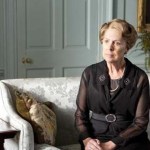 Sweet sendoffs, new suitors, a surprise engagement and baby mama drama made us laugh and cry during the season five ‘Christmas Special.’

The episode begins with the house preparing for a trip to Brancaster Castle, where they’ll visit Rose’s rude in-laws. Unfortunately Anna is still in jail so Mr. Bates stays behind, as does the Dowager Countess. The Russian Prince’s wife has been found and the Dowager orchestrates the long-awaited reunion for the couple.

Baby mama drama! When it comes to scheming no one does it quite like Barrow. It turns out there is a man more miserable and even more rude than Rose’s father-in-law — and that man is Lord Sinderby’s butler! Not only does he look down upon the Downton staff, but he refuses to treat Branson equally. When Lady Mary enlists Thomas to stir up some trouble it goes a bit too far when Lord Sinderby’s sidepiece shows up with his young son, who just so happens to be named after Lord Sinderby. It looks like the grumpy man isn’t as proper as he would like everyone to believe!

Rose, being the clever, sweet gal she is, steps in and saves the day, making it seem as if the mistress is actually one of her close friends. Mary and Lord Grantham play along and the evening continues, drama-free. Lord Sinderby couldn’t be more grateful for the way they played along and he finally accepts Rose with open arms — and says he plans to invite her divorced parents to the house after all. Although when she first moved to Downton I wasn’t obsessed with her, Rose is one of my favorite characters — and I’m so sad to hear that she’s moving to NY.

Rose and Atticus aren’t the only ones skipping across the pond. Branson and little Sybil are heading to Boston — and in a tear-inducing moment, Tom, Mary and Edith hold hands and speak to the late Sybil, (bring on the water works). Lady Mary and Lady Edith even hold hands — with Tom gone who is going to keep these two from tearing each other apart in a verbal assault? Just like Lady Mary, I just can’t deal with all the changes at Downton.

Everyone Knows About Marigold….Except Lady Mary:

Lord Grantham’s chest pains cause him to really seize the moment — and by seize the moment, I mean he bursts into Edith’s room in his pajamas to tell her he knows that Marigold is really her child. The moment is actually really sweet — not only do we get to see Lady Edith with her hair down, but her storyline really comes full circle. It is so nice to finally see her a little less miserable and even quite happy. Side note — am I the only one who thinks Lady Edith should start wearing her hair down? It just might help her attract a suitor — hey, if Mary can get a new ‘do why can’t Lady Edith switch up her look?

Although Edith is sporting the same hair, she still chats it up with a house guest when they go out shooting — it looks like Stella just might be getting her groove back after mourning Mr. Gregson for the entire season! If I have only one wish for season six it would be for the turn-of-the-century Jan Brady to finally find a man — a real life, alive suitor who isn’t already married to a terminally ill woman.

Now everyone but Mary knows about Marigold. Although Lady Edith would sooner go streaking through the Downton estate than ever tell her sister the truth, she shouldn’t be so nervous about her finding out. After all, Lady Mary had a man die in her bed and escaped on a secret sexcapade with Lord Gillingham.

Surprise, surprise, Lady Mary attracts a new love interest — and we’re bound to see more of him next season. Right now, I’m not too enthusiastic about this one — right from the start I don’t think they have much chemistry, but I’m also still totally #TeamTony. I much rather see Mary turn up at Tony’s wedding to Mabel Lane and object at the last moment — what does one wear when objecting at your former lover’s wedding?

The Bates’ are still holding onto their title of public enemy no. 1 as their unluckiness continues to bring down the entire house. Bates confesses to the murder of Mr. Green to get Anna out of jail and flees to Ireland to hide out from the police. Mr. Moseley and Mrs. Baxter go to great lengths to back up Mr. Bates’ alibi, which works in his favor — and he returns just in time for Christmas Eve at Downton! Mary couldn’t be more excited to see Anna return to the estate. I know they are total BFFs, but you all know that Anna wasn’t the only one suffering….Mary’s wardrobe has definitely been hurting with Anna away. I hope she brought her button box back with her!

For years we’ve been waiting for the honorable Mr. Carson to finally make a bold move, (and we’re not just talking about a picnic!), and he finally does, asking Mrs. Hughes to marry him. I love that these two are finally getting together.

Isobel decides she won’t marry Lord Merton after all, because his heinous, snotty, controlling son refuses to accept her — but at least now she’ll be able to keep the Dowager Countess company! For a second there we thought she might pack her best evening dress and run away with her Russian lover — but instead, she finally tracked down the Princess and the couple reunited, (although the Princess really isn’t much of a prize — no wonder the Prince was eager to run off with the Dowager before she was found). My dreams of Isobel and the Dowager double dating are now crushed.

From start to finish, the episode wrapped up perfectly — do you agree?