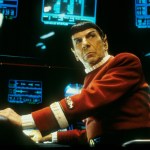 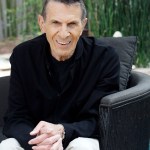 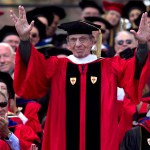 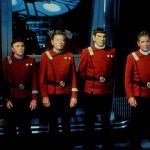 As the tragic news of Leonard Nimoy’s death spreads, fans are finding different ways to mourn his passing. Trekkies immediately turned to Spock’s funeral scene from the film The Wrath of Khan where the cast said a tearful goodbye their good friend.

We are all heartbroken over the death of beloved actor Leonard Nimoy, 83, who left us on Friday, Feb. 27. The legendary Star Trek actor suffered from end-stage chronic obstructive pulmonary disease. Although his funeral details have yet to be released, fans across the globe are already commiserating by sharing Spock’s funeral scene from the film The Wrath of Khan.

“Of my friend I can only say this. Of all the souls I have encountered in my travels, his was the most human,” said Admiral James T. Kirk in an emotional eulogy in the 1982 film. Spock’s body is then launched out into space while bagpipes play and co-stars such as Kirstie Alley cry.

And while these words were part of the movie’s script, we think they couldn’t be more fitting.

Leonard will be eternity remembered as Spock, Captain Kirk’s right hand man, on the original Star Trek series. His longtime costar and friend William Shatner, who played James Tiberius Kirk, was crushed by the news, letting everyone know how much he will miss the acting icon.

“I loved him like a brother,” William said in a statement. “We will all miss his humor, his talent, and his capacity to love.”

Nichelle Nichols, 82, who played Uhura in the series, released the following statement on his passing:

“I am deeply saddened by the death of my dear friend Leonard Nimoy.  But, I also want to celebrate his extraordinary life.  He was a true force of strength and his character was that of a champion.  Leonard’s integrity and passion as an actor and devotion to his craft helped transport STAR TREK into television history.  His vision and heart are bigger than the universe.  I will miss him very much and send heartfelt wishes to his family.”

HollywoodLifers, our thoughts and prayers go out to Leonard’s family.