Shots fired! Tyga snapped back after Drake dissed him and his relationship with Kylie Jenner on his new track ‘6PM in New York.’ You won’t believe what he said on Twitter!

Tyga, 25, called Drake,28, a “bitch” in his Twitter rant — and that’s not all he said! Tyga was clearly extremely offended by Drake’s diss and couldn’t keep quiet — find out what Tyga posted before quickly deleting his message! 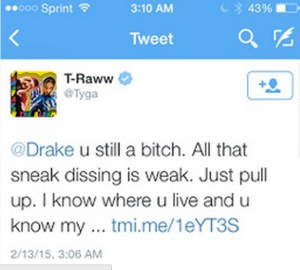 Full Tweet: @Drake u still a bitch. All that sneak dissing is weak. Just pull up. I know where u live and u know my address.. U been ducking the fade from Brown.

You guys, that’s pretty intense! In case you’re a bit lost, Tyga wrote that message in retaliation to Drakes new song “6PM In New York” where he disses Tyga and his girlfriend Kylie, 17!

On the new track, which dropped on Feb.13, Drake raps:

I heard a lil lil homie talking reckless in Vibe
Quite a platform you chose, you shoulda kept it inside
Oh you tried, it’s so childish calling my name on the world stage
You need to act your age and not your girl’s age

He is clearly calling  Tyga out for dating such a young girl (Kylie.) If you don’t understand the reference to “Vibe,” Tyga spoke out to Vibe magazine in October, saying, “I don’t like Drake as a person. He’s just fake to me. I like his music; you know what I’m saying? I think his music is good, but we’re all different people.”

HollywoodLifers, do you think it was wrong of Drake to drag Kylie into his feud with Tyga? Let us know your thoughts in the comments below!