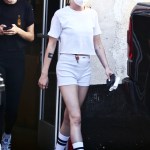 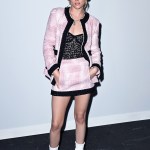 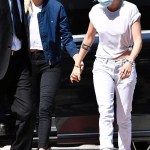 Kristen rocked two looks in one day in New York City on Oct. 7 as she promoted her new movie ‘Camp X-Ray.’ Vote on your favorite look below!

Kristen Stewart, 24, taped an episode of The Tonight Show Starring Jimmy Fallon during the day and then later went to the Apple store in SoHo for a Meet The Filmmakers panel to talk about her new flick. She rocked a sultry, smokey eye and nude lips at both appearances.

Kristen wore a green sweater and black miniskirt on The Tonight Show. Her skin looked flawless and her eyes were defined in black.

For the Apple store discussion, she switched into black leather overall shorts and a red top. Her new haircut was styled in a deep side part and slightly messier than her Tonight Show look.

To get her look, get the Le Volume De Chanel Mascara — Kristen loves playing up her eyes and this mascara will make you stand out!

Makeup artist Jillian Dempsey worked with Kristen for the NYC premiere of the film on Oct. 6. She told Byrdie Beauty about the night and the blue ocean-inspired eye she created:

“I walked into the room, and [Kristen] was just finishing getting a haircut. Her cut is so incredible — it had that perfect David Bowie-esque, androgynous thing going on. When I originally went into the job, I thought I would be doing some sort of ‘60s look on her. That was before I saw the cut, so it’s always a good lesson to learn that, as a makeup artist, you can never really arrive with a pre-conceived notion of what you want to do.”

“The best thing with mascara is that you can take it north, south, east, or west, if you want to. For [Kristen’s] bottom lashes, I wanted them to look a little plumper without looking twiggy, so I just used the very tip of the mascara wand and went back and forth to make them fuller.”

Which look do you love on Kristen, HollywoodLifers?