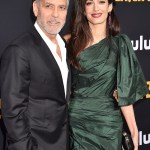 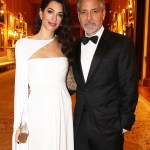 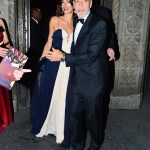 George Clooney and Amal Alamuddin married on Sept. 27 after a whirlwind romance — say goodbye to your well-documented days of bachelorhood, George! Congratulations to the newlyweds!

George Clooney, 53, formerly one of Hollywood’s most infamous bachelors, has finally gotten married! On Sept. 27, George wed fiancée Amal Alamuddin, 36, in a beautiful ceremony in Venice, Italy. Congrats to the happy couple!

George and Amal married on Sept. 27 in a lavish ceremony at the Aman Canal Grande resort in Venice, People reports.

The couple was married by George’s close friend and the former mayor of Rome, Walter Veltroni.

George Clooney & Amal Alamuddin: See Pics Of Their Road To The Altar

George wore a slick Armani suit for the nuptials. No word on Amal’s dress, but we’re absolutely certain it was beautiful!

Over the course of their wedding weekend, George and Amal threw a rehearsal dinner, bachelor and bachelorette parties.

George and Amal have enjoyed a total whirlwind romance; they were first spotted stepping out together in Oct. 2013 in London, but their romance was confirmed in Feb. 2014 when they were photographed holding hands at a White House screening of his film Monuments Men, reported People.

The pair got engaged on April 22, after George reportedly cooked a meal for the two of them at his home and “then he surprised her by getting down on bended knee and presenting her with the ring,” a source revealed to Page Six. And what a ring it was — the seven-carat diamond and platinum engagement ring set the actor back $750,000.

“I was married in 1989. I wasn’t very good at it. I was quoted as saying I’ll never get married again pretty much right after I got divorced and then I’ve never talked about it since,” George said an oft-quoted 1995 interview with Barbara Walters.

It took a while, but nearly 20 years later, George totally ate his words. We’re so glad that he did — he and civil rights lawyer Amal seem so happy and in love, and we wish them all the best in their marriage.

HollywoodLifers, what do you think about George finally getting hitched? Do you like them as a couple, or not so much? (And if you don’t, are you man or woman enough to admit that you’re just jealous?) In any case, huge congrats to the newlyweds!