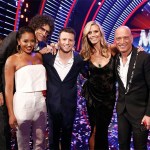 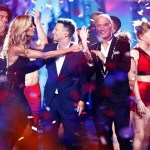 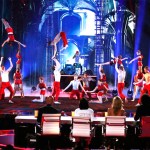 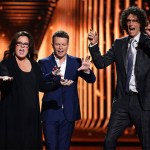 The live shows of ‘America’s Got Talent’ continued on Aug. 26, for round one of the semi-finals, and the talent did not disappoint! With twelve acts, and only six spots open to advance, the competition was fierce!

The quest for the million dollar prize continues! America’s Got Talent was back on Aug. 26, with round one of the live semi-finals. With twelve acts performing, and only six spots available to move on to the next round, the competition heated up, and caused the judges to be at one another’s throats! Read below for our full recap!

After a brief recap of who would be showcasing their talents, the competition started right away, and introduced the judge’s wildcard picks. Each judge was allowed to bring back one previously eliminated contestant to come back for a second chance!

The night kicked off with Heidi’s wildcard pick, Flight Crew Jump Rope came back with vengeance. Performing to Ariana Grande‘s “Break Free,” the group definitely had plenty of new tricks up their sleeves. Mel B , 39,and Heidi Klum, 41, both get them a standing ovation. The Spice Girl even said, “that is the way to kick off the show tonight, well done, I am proud of you!” Meanwhile, Howie Mandel, 58, was not totally impressed and thought that the pressure got to them — however, the audience did not agree and booed him.

12-year-old powerhouse vocalist, Mara Justine, tackled “Breakaway” by Kelly Clarkson. She definitely didn’t let the song overpower her, even adding on some huge high-notes to the already super challenging song. All four judges gave her a standing ovation. Howie gave her a glowing recommendation, “you are exactly what this show, this is the semi finals, of the best season yet, people need to vote for you!”

Howie’s wildcard was magician, Mike Super. The magic-man previously burned Mel B on stage and wowed everyone with the help of Desmond, his spirit. Leaving, Desmond at home, the act started off in a plexiglass cage. As the judges shuffled the cards in front of them, Mike was covered in a cloth so he could be blindfolded the whole time. While they were busy with cards, Mike somehow managed to get all the way in the back of the audience with triangles (which was the symbol the Howard chose) on his hands, as well as the audiences! Amazing! All of the judges were amazed and were so glad that he was brought back, and called him “dazzling.”

Hand-balancer, Andrey Moraru, showed off his incredible strength and flexibility in a crazy amazing performance. His talent was incredible, but he did slightly lose his balance at the very end of his act — otherwise it was flawless! Howie said, “it’s thrilling to see you, to watch you, and to be on the same show as you!”

Heart throb, Miguel Dakota, made the most of his 90 seconds with his rendition of the White Stripes, “Seven Nation Army.” While Howard complimented the singer on being charismatic, his good looks and star quality, he said. “you need to work on something, I don’t feel the connection with the song.” While Howard Stern, 60, disagreed and said, “I think you have a great chance at winning the million dollars.”

Sons of Serendip, may have only been together for a few months, but they are so in sync with one another that it seems that they have been playing together for years!  Tackling Swedish House Mafia‘s “Don’t You Worry Child,” the group of string instruments really switched up the arrangement and made it their own, and gave it a softer feel. Heidi said, “I don’t think you have anything to worry about, you were great.” Howard only had one complaint, “the worst name for a group.”

The hilarious magical duo, David & Leeman had one goal for the performance, they wanted Heidi to get up out of her seat! They placed a sharp “X” inside a bag and asked each judge to pick a bag for them to smash, hoping that the nail “x” was not inside. Once they were down to the final two bags, poor Nick Cannon was called out to smash the bags. Mel B said, “I loved it from start to end!” Howie kept it super simple and said, ” I like it!”

Singer, Emily West, has tackled some of the biggest ballads this season, and has impressed the judges and audiences every time she has stepped on stage. Taking on “Who Wants To Live Forever,” by Queen, Emily rocked a new rendition of the classic song, that was jammed packed full of high notes and plenty of raw emotion. All four judges were once again on their feet! Heidi even revealed, “I have a lady crush on you, I think you are fantastic.”

The Judges Least Favorite Acts Of The Night

Mel B brought back the Bad Boys of Ballet as her wildcard pick! While their performance was engaging, Howard was not impressed and criticized Adrienne, the only girl the group for leaving the stage for half of the performance. Howie was also not so sure about the act saying, “I’m not sure it’s a million dollar act.”

Veteran, Paul Ieti graced the stage with a slowed down, throwback performance of “I Want It That Way” by the Backstreet Boys. Adding in some high-notes and riffs, he made it his own. However Heidi said, ” that was not your best performance.” While Mel B felt that Paul was not as confident tonight and was doubting himself.

Comedian, Dan Naturman, revealed that he was just surprised to be still be on the show! Unfortunately, the judges were not all impressed, especially Heidi, “It is impressive that you managed to offend basically everyone.” Howie felt differently,  saying, “you are very funny, it is smart writing, I think America should go Naturman.”

Ariel Animation was next. This act has been one of the most popular throughout the competition. The judges always praise Ariel for her genius combination of combining storytelling, acrobatics, and animation all in one. Unfortunately, the female judges did not enjoy her performance as much as they had in the past. Heidi said, “I feel like you took a step back, I’m sorry.”

What do YOU think, HollywoodLifers? Who do you think should advance to the top twelve? Let us know your thoughts below!