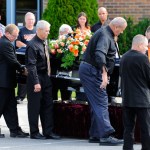 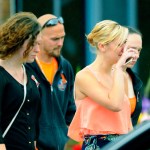 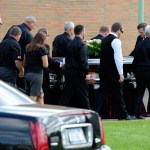 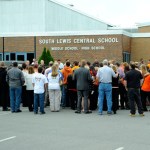 Just moments before Kevin Ward Jr. lost his life in a deadly accident involving Tony Stewart on Aug. 9, Kevin got out of his car and seemed to be trying to catch Tony’s attention before being killed. Watch the video below of the tragic accident.

Kevin Ward Jr.’s, 20, car was spun out by Tony Stewart, 43, at Canandaigua Motorsports Park in upstate New York for the Empire Super Sprints series event on Aug. 9, prompting Kevin to get out of the car. As evident in the video, Kevin tried to signal Tony’s attention, and an eyewitness details the scene. Seconds later, Tony’s car accidentally hit and killed Kevin after it dragged him across the track.

Kevin Ward Jr. Got Out Of Race Car To Yell At Tony Stewart Before Accident

In Turn 2 of the race, Tony and Kevin’s cars hit, causing Kevin’s car to head into the outside wall, USA Today reports. In the video, Kevin retreated from the car and seemed to be showing anger over the incident.

Kevin walked into the middle of the track with multiple cars flying by. One car swerved to avoid hitting Kevin, but Tony wasn’t so lucky. Tony’s car hit Kevin and hurtled him a few yards down the track.

An eyewitness detailed the series of events that led to Kevin’s death. “The prior lap, Tony had gotten into him – just spun him, nothing big, just spun him around,”Adam Dulski told USA Today. “The caution came out. He hopped out of the car – the driver of the 13 … he hopped out to go and yell and point a finger at Tony, typical thing.”

“Tony came around … the back end slid out, and he definitely caught him – I couldn’t tell if it was with the front or the back of the car… The body made contact with the car and went sliding across the track,” Adam continued. “It was the worst thing I’ve ever seen.”

Fans and fellow race car drivers continue to mourn the untimely death of Kevin. Tony, who was supposed to be racing at the Cheez-It 355 at The Glen at Watkins Glen International in New York, opted not to race in the Aug. 10 event, a source told HollywoodLife.com EXCLUSIVELY.

Tony released a statement following the accident and sent his condolences to Kevin’s family.

“There aren’t words to describe the sadness I feel about the accident that took the life of Kevin Ward Jr,” Tony’s statement read, according to ESPN. “It’s a very emotional time for all involved, and it is the reason I’ve decided not to participate in today’s race at Watkins Glen. My thoughts and prayers are with his family, friends and everyone affected by this tragedy.”

Kevin’s aunt, Wendi Ward, wrote a detailed Facebook message on Aug. 10 about her “deep hurt” over Kevin’s death and she also called Tony a “d–k.”

In addition to Tony, NASCAR also released a statement on Kevin’s death, according to ESPN:

“Our thoughts and prayers go out to the family, friends, and fellow competitors of Kevin Ward Jr. We support Tony Stewart’s decision to miss today’s race and we will continue to respect the process and timeline of the local authorities and will continue to monitor this situation moving forward.”

The video of the accident is below. WARNING: The video is extremely graphic.

Our thoughts and prayers go out to Kevin’s family and friends at this time.