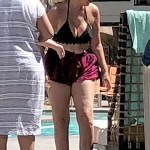 No wonder Tori is having such a difficult time! On the April 29 episode of the revealing reality series ‘True Tori,’ Dean opens up and tries to explain his infidelity, but he really only digs himself deeper.

Poor Tori Spelling. Her troubled husband Dean McDermott will finally address his cheating scandal on the April 29 episode of True Tori. Unfortunately for everyone involved, he gives the lamest excuse for it ever. See what shocking things he had to say!

“I didn’t think I would get caught,” Dean told the cameras. No, really. That’s what he said. Oh, and he continued:

We don’t wanna be too harsh — we do feel for Dean in his struggle with drugs and alcohol, but he’s still responsible for his actions, especially against the woman who supports him no matter what! And just a lesson to anyone out there who cheats — “I didn’t think I would get caught” is literally the worst excuse you could give.

At least Dean is learning to clean up some of the things he said, such as noting “our relationship and sex life is solid.” That’s an improvement from what the guy said during the first episode of True Tori.

“We would have sex once every two weeks,” Dean said. “It wasn’t fantastic.” Ouch! Maybe someone needs to remind Dean that he’s the one who’s supposed to be trying to win Tori back?