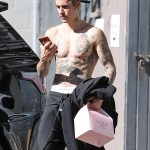 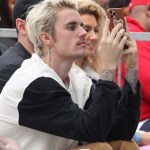 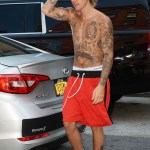 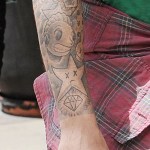 Oh no! Justin Bieber has been detained by U.S. customs officials at LAX Airport after flying in from Japan on April 24.

Justin Bieber, 20, hit a speed bump while returning from his recent trip to Japan with mom Pattie Mallette and a few friends. U.S. customs agents at Los Angeles International Airport are reportedly doing a “secondary customs search” on the embattled singer  — is he in trouble again?

UPDATE: Justin has been released after being detained at immigration at LAX for four hours, SplashNews reports. The Biebs was in surprisingly good spirits, “smiling and sticking his tongue out as he was greeted by a throng of photographers and fans at the airport,” according to the site. “The scene was chaotic as he made his way through the crowd, flanked by his bodyguards, one of whom directed Justin by holding him by the scruff of his neck.”

Justin has been detained — but it’s because of his recent run-ins with the law, rather than for some new offense, TMZ reports.

Justin and his entourage landed in Los Angeles at approximately 1 p.m. PST on April 24, but his friends, his ride and his baggage were still waiting outside for him as of 4 p.m. PST.

Meanwhile, the Believe singer was being questioned about his open criminal cases, including his Miami DUI arrest, his egg-throwing incident involving his neighbor, and his misdemeanor assault case in Toronto.

But the customs officials giving Justin the third degree is simply procedure because of his hefty criminal record, and it doesn’t mean that he’s facing any new charges, LA attorney Mychal Wilson tells HollywoodLife.com EXCLUSIVELY.

“The 2001 Patriot Act, signed by former President George Bush and extended by current President Barack Obama, gives custom officials the broad authority to flag travelers arriving from a foreign country when they have an active criminal case or a conviction,” Mychal explains. “Presumably, Justin Bieber is on the Homeland Security watch list due to the various pending criminal charges against him.”

Yikes! That’s definitely not a list you want to be on, but we’re relieved that Justin doesn’t seem to be in any new trouble.

“Hopefully, Justin Bieber has been following and learning from fellow recording artist Chris Brown‘s legal troubles so that they both are not traveling on Con Air for their respective upcoming trials,” Mychal adds.

Justin may be a bad boy in the eyes of the law, but he’s still a hero to millions of fans across the world — including the group of young children that he surprised at a Japanese orphanage on April 23.

Justin unexpectedly stopped by the orphanage to play with the children, and later shared a sweet video of his visit on Instagram.

We love seeing this softer side of Justin, and we hope he will continue to do good deeds like this and stay out of trouble!

Tell us, HollywoodLifers — Are you surprised that Justin was detained at LAX? Are you worried about him? Let us know your thoughts below!