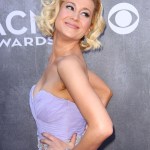 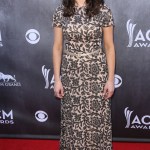 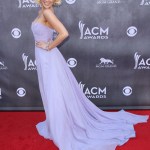 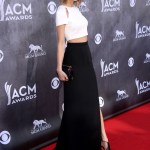 Miranda showed off her sexy new figure at the 2014 ACM Awards on April 6 in Las Vegas, Nevada and can we just say…wow! Her hard work has really paid off — she looked amazing!

Miranda Lambert‘s Cinderella story continues! At the MGM Grand Garden Area, the 30-year-old singer looked like a golden goddess on the red carpet. Do you think this is her sexiest look ever? Tell us below!

Miranda looked seriously stunning in a revealing gold dress. If you’ve got it, flaunt it!

Her blonde hair was cascading down her back. She wore thick eyeliner and soft shadows, but the eye makeup really made her eyes stand out. Her skin looked flawless with a pink blush on her cheeks. On her lips, just a hint of soft pink gloss.

How Miranda Lambert Lost The Weight

Miranda admits that she lost weight by giving up beer and Cheetos — love the honesty!

She told People magazine in November 2013: “I didn’t know until [the 2013 CMA Awards] that people were noticing. But you want people to notice when you’ve worked hard and feel good. That’s part of the reward. It’s a great motivator. I spent my 20s on  a roller coaster — my yo-yo weight, working all the time and partying. I just wanted to get healthier and go into my 30s in the best shape I could be in.”

With her personal trainer, she says: “We do cardio and a lot of circuit training. We do things that use my body weight, like lunges. People think I lost more [than a dress size], but I’m 5’4″, so when I lose, I lose everywhere.”

Her diet now consists of a green juice for breakfast, instead of bacon and eggs, and chicken, instead of steak, for dinner.

If she indulges in a burger, she’ll cut it in half. “Smaller portions right from the start,” she told the mag.

Keep it up Miranda, you look amazing!

Do you think this is Miranda’s sexiest look ever, HollywoodLifers?