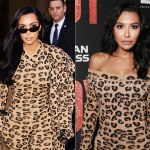 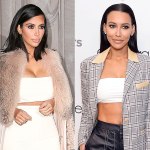 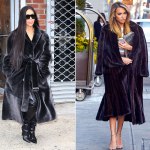 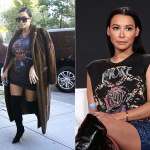 It started in early January, when Naya dyed her hair blonde and started to resemble the reality star. Now, she looks more like her than ever before! Do you think she’s trying to look like Kim?

Is Naya Rivera trying to tell us something? Whether she is doing it on purpose or not, she is starting to resemble Kim Kardashian more and more! She especially looked like Kim in a new Instagram selfie she posted on March 22. The huge cleavage, the sparkly diamond engagement ring, the blonde highlights — they are one in the same! What do you think, HollywoodLifers?

Naya has definitely become more curvy since she first hit the acting scene as a sweet cheerleader on Glee. Kim has always been known for being curvy, specifically for her famous backside!

And now, the two look so much alike. Do you think Naya is trying to morph herself into Kim? Or is she just becoming sexier on her own?

She’s starting to dress like Kim, that’s for sure! Naya is so talented — she is an amazing singer and dancer! We hope she is taking these sexy selfies for herself and not because she is trying to be someone else!

Did Naya Rivera Have A Boob Job?

Speculation that Naya had a boob job made headlines after she posted a smoking hot bikini pic on March 18. Four plastic surgeons told HollywoodLife.com that it appeared that she got breast implants, at least two cup sizes bigger.

“Early photos of Naya show breasts that are likely a very small B. Subsequent photos appear to show that she has had breast augmentation. The well defined cleavage and roundness is suggestive of breast implants. She appears to have increased to a small C in 2013 and may have even had them enlarged again to a very large C or small D cup [in 2014].”

Do you think Naya is trying to look like Kim Kardashian, HollywoodLifers?