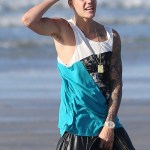 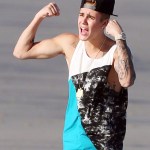 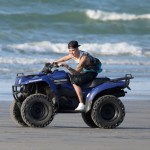 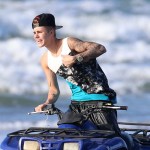 Justin is having quite an adventure in Panama with his rumored new girlfriend Chantel Jeffries. After the two were spotted parasailing together on Jan. 26, Justin was caught on camera riding an ATV and filming an impromptu video on the beach while his model main squeeze looked on adoringly.

Justin Bieber seems to be having the time of his life in Panama, despite the fact that his mother, Pattie Mallette, manager Scooter Braun and close friend Usher travelled there, reportedly to stage an intervention for the troubled young singer. Justin, who was charged with a DUI in Miami on Jan. 23, escaped to Panama with his new fling Chantel Jeffries on Jan. 25, and has been staying at a resort there ever since.

Justin, 19, is definitely keeping busy in Panama. He was spotted looking full of raw emotion as he filmed an impromptu music video while riding an ATV on the beach on the afternoon of Jan. 27. Justin sang into a small camera and made passionate hand gestures while friends, including Chantel, watched. Do you think he was singing about his ex Selena Gomez?

At one point, Justin, who was wearing a pair of baggy black shorts, a tank top and a backwards hat, took off on his quad bike. He pulled over for a group of ecstatic local fans, touching their hands before driving off again, according to SplashNews. In one of the photos, Justin seems to be jumping off the ATV — we hope he landed okay!

All the while, Chantel, 21, was watching from the sidelines in a skimpy bikini bottom and crop top. Things definitely seem to be heating up between Justin and Chantel — but is she really a good match for him?

We’re surprised to see Justin having so much fun, after all of the people closest and most influential to him – Pattie Mallette, Usher, Scooter Braun, Ryan Butler and Ryan Good — met the singer in Panama on Jan. 25 for a reported sit-down.

The group was hoping to get Justin to see the error of his ways, according to TMZ. And while the word intervention has reportedly not been used, the spirit of the meeting is sure to be similar. It’s not yet clear whether Justin’s mom and the others have already had the talk with him or are still waiting for the right moment.

So what do YOU think, HollywoodLifers? Should Justin’s friends and family stage an intervention in Panama? Let us know.