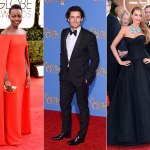 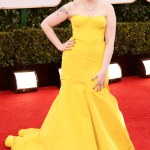 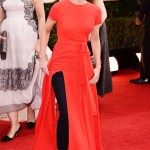 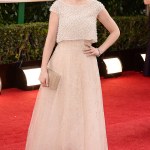 Lena Dunham stood out in a form-fitting bright yellow Zac Posen dress on the red carpet at the 71st Annual Golden Globe Awards at the Beverly Hilton Hotel in Beverly Hills on Jan. 12. This is definitely her sexiest look to date!

Lena Dunham, 27, looked anything but mellow in yellow when she hit the carpet in Beverly Hills, Calif. in this statement-making strapless gown! We’ve seen a lot of Lena’s luscious body on Girls but we’ve never seen her show off this much skin on the red carpet before — and we must say she looks fabulous!

Lena is known for courting controversy on her ground-breaking HBO show Girls and now she’s causing quite a stir on the Golden Globes red carpet! It’s the Girls creator and star’s second time at the Globes and she certainly looks confident posing in Posen! And it’s no wonder — Lena’s mermaid-style frock hugs her famous curves in all the right places!

She paired the bold dress with equally eye-catching red lips and nails, and a simple diamond necklace.

Her cropped hair was swept to the side in loose, glamourous waves. Lena looks every bit the movie star but the striking tattoo on her right shoulder is a reminder that underneath all this glam, she’s still the same alterna Lena we know and love.

Her look is the perfect combination of old Hollywood and fashion forwardness — we can’t get enough of it!

HollywoodLifers, do you love Lena’s red carpet look as much as we do? Let us know!