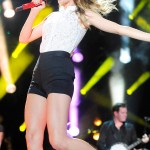 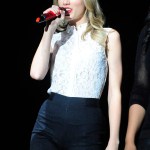 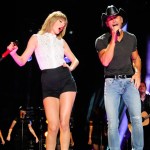 The songstress looked sensational as she arrived, decked out in an ethereal gown. Did you love her latest look as much as we did? VOTE.

Taylor Swift is turning heads in one great look after another! After dressing to impress in a gold Julien Macdonald mini at the 2013 American Music Awards on Nov. 24, the 23-year-old songstress skipped across the pond to headline the Winter Whites Gala at Kensington Palace in London on Nov. 26, where she looked phenomenal in a plunging Reem Acra gown. Not only was her choice so festive, but she looked so chic — doesn’t she look like a princess? Everything about her look was perfection!

The star selected an off-the-shoulder gown which featured a gold, embellished bodice and a plunging neckline. The ethereal design actually looked as if it was painted on her as the gown fit her frame perfectly. The detailed top gave way to an ivory skirt that featured a ruffle on one side. With her hair pinned back to keep the focus on the gorgeous neckline of her dress, she sported a bright pink lip and liquid eyeliner, which made her baby blues really pop. Everything about this look was simply gorgeous — and it was a perfect choice for the big night! She finished it off with a Jenny Packham clutch.

The event, (which transforms the home of the Duke and Duchess of Cambridge into a winter wonderland), is thrown as a benefit for the homelessness charity Centrepoint. While Taylor is headlining the glam evening, Jon Bon Jovi James Blunt are also scheduled to perform. Additionally, Bon Jovi will be honored with the Centrepoint Great Britain Youth Inspiration Award, which recognizes the singer’s humanitarian work as the founder of the Soul Foundation. His organization aids families and individuals in economic despair.

What do you think of Taylor’s gorgeous gown? Do you think it’s breathtaking or were you not impressed? VOTE.