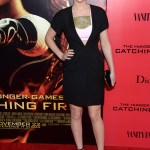 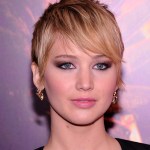 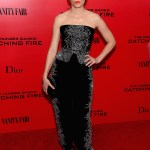 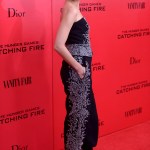 The face of Miss Dior wore yet another look by the fashion house as she walked the red carpet at the NYC premiere in a jacket and a bra — did you love her look? VOTE.

Jennifer Lawrence left her glam gowns at home and instead showed up wearing an entirely new look as she arrived at the AMC Lincoln Center theatre for the Catching Fire premiere in NYC on Nov. 20. While she decided to dress in a different designer for her appearance on the Late Show With David Letterman, it wasn’t long before the 23-year-old slipped back into Dior! This time around she selected a black wool Dior jacket that buttoned at her waist. Since the neckline was so open, (it is a jacket, after all!), she wore a pink and lime knitted bra underneath that kept her covered while still showing a hint of skin and adding a pop of color to the ensemble.

Jennifer looked confident in comfortable as she walked down the red carpet, sporting the look with a pair of ankle-strap sandals. Kohl-rimmed eyes, shimmering shadow and a nude lip completed the ensemble as she carried a black clutch at her side. While it comes as no surprise that she, once again, donned Dior, it was an interesting choice. Dior is known for their tailoring and their coat dresses, but not everyone can necessarily pull off the look — but Jen definitely did! While it seems a bit dressed down, (especially compared to the slew of stunning gowns she has worn so far), I can’t blame her for wanting to switch up her style — and I kinda like this look on her! Sure, it isn’t my favorite, but it’s different so I’ll take it — it isn’t every day a star steps out in just a jacket and a bra! She added to the ensemble by rocking Dior fine jewelry, which included gourmande pastel yellow gold and green beryl earrings and a oui pink gold, diamonds, and morganite ring.

While I think there’s a sharp contrast when this look is stacked up against all of the couture gowns she has worn on the promotional tour, I do like that it highlights different parts of her figure that we didn’t get to see in her voluminous dresses — although I do wish she was just a little more dressed up! What do you think? Are you loving her latest Dior get-up or are you growing tired of all her looks so far? Do you think she should’ve dressed up more for the NYC premiere?