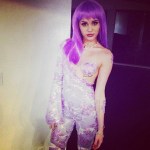 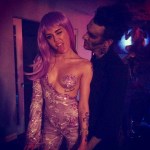 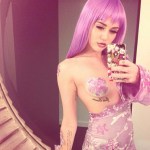 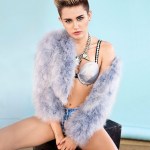 After much anticipation, Miley, Will.i.am, Wiz Khalifa & French Montana officially released their upbeat track on Nov. 5. Listen here, and tell us what you think, HollywoodLifers!

Two singles featuring Miley Cyrus released in one day? We love it! Following “Real and True,” a romantic slow jam with Future, Miley is total fun in “Feelin’ Myself,” a new hip-hop song from Will.i.am‘s re-release of his #willpower album. The self-produced track also features French Montana and Wiz Khalifa.

As the headliner of the track, Will.i.am takes most of the spotlight in the sure-to-be club hit, while Miley splits time with rappers Wiz and French -– but she still manages to stand out, because she raps about twerking and popping molly!

Check out the full lyrics here:

I’ll be everywhere, everybody know me
Super, super fresh, what a dope styling
Honey on my wrist, couple carots on my neck
Givenchy, keep the chickens in check
All these car keys, drive them chickens to my crib
Jewel heel, got somebody slipping in my bed
She gave me a cue, that mean she get a head
I just give the beats, so don’t give a bread

Up in the club is where you find me

I do it real big never do it tiny

I be everywhere, everybody know me
Cash me in the club, all the bottles on me
I get a busy like a one line
And drop your head
Baby, nevermind
We getting money, while you playing with it
Pool in the crib
You can land a water plan in it
Slick Rick looking at the mirror

HollywoodLife.com EXCLUSIVELY broke the news in June that French was set to collaborate with Miley!

“I love Miley, she’s a cool person, I love working with her. She’s having fun, I love people that are having fun with their work. I heard a couple tracks [off the new album] they’re cool,” French said.

French admitted to us in April that he and Miley had been collaborating together.

“That’s my dog. We became friends at the Clive Davis’ Grammy party. I was sitting there with Puff. She was sitting there with Wiz [Khalifa]. She just kept looking at me laughing, I kept on looking at her laughing,” he said. ‘I said, “What you laughing at?” She said, ‘I know you high like me.’ After that, we became mad cool. I went over to the studio, just kicking it. Yeah. We working on something now.”

Do YOU love “Feelin’ Myself,” HollywoodLifers? Let us know!