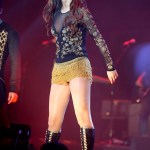 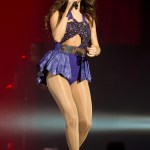 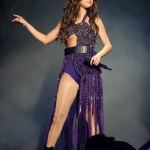 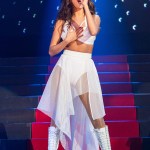 Selena, George admitted that the two of you have been exchanging flirty texts, and I think it’s great that you’re showing  romantic interest in someone besides Justin Bieber!

Selena Gomez, it was so sweet when Union J’s George Shelley revealed that he has a huge crush on you — and he’s clearly piqued your interest too, as you made a video on June 7 telling him to call you! It’s very healthy for you to explore other relationships right now, and it’s time for you to free yourself from your longterm infatuation with your ex Justin Bieber.

Selena, It’s Time To Move On From Justin Bieber — For Now

Selena, you and Justin still have a strong friendship and a huge amount in common, and while it’s totally possible that you two will get back together sometime in the future, the relationship is probably not emotionally fulfilling for you right now.

You certainly seem more mature than Justin, 19, — you have a better handle on your life, and you didn’t have any issue staying committed to him. It’s Justin who has wanted to have his cake and eat it too. On one hand, he still loves you, Selena — there’s no question about that — but on the other, Justin seems to want to be able to date other people, especially models.

That leaves you on an emotional roller coaster, and even though you’re not in an exclusive relationship with Justin, you must still feel very tied to him because you seem to put have put yourself in a friends with benefits situation with him.

“Their relationship is at a bit of a holding pattern,” a source close to the couple told HollywoodLife.com EXCLUSIVELY. “They are pretty much single but will hook up when they are in the same city.”

Selena, you really have to ask yourself if that friends with benefits relationship is making you happy.

Selena, it’s healthy that you’re at least enjoying a flirty texting relationship with George, 20, who confessed his feelings for you to Sugarscape in February.

“I’ve got an undying crush on her,” George said. “It’s the whole Disney thing. I love her.”

On August 18, George admitted that you two “are still messaging!”

Selena, having a cute guy like George crushing on you has to be good for your ego, especially after Justin’s been stepping out on you!  Cooper Lawrence, relationship expert from The Big Show with Scott & Todd, tells HollywoodLife.com:

I think it’s great that she’s flirting because her fans watch her closely and they will see that she isn’t pining for Justin, but instead she’s moving on in a really healthy way. It’s a great message to send that she’s not waiting for Justin or any guy to make a move, but that she is taking control. Studies show that flirting plays a big part in non-verbally communicating to a perspective partner that you’re confident, sexual and have high self-worth…and…generally, that you feel great in your own body and where you are in your life.

Selena, Cooper is right. You’re only 21 years old, and even if you and Justin end up recommitting and deciding you’re right for each other, you’re so young that it makes sense for you to explore other romantic relationships with guys that respect and adore you now! That’s how you grow and learn what you really want out of a relationship –  by experiencing new romances.

Selena, You Deserve More Than A Friends With Benefits Relationship

Selena, the good thing about George is that he is a musician also, so he gets what you’re going through as you start your new tour. There aren’t many guys in the world who will understand that experience!

Also Selena, we really hope that you do reflect on the state of your relationship with Justin. Ask yourself: Do you really want to be in a friends with benefits relationship, or is that making you feel undervalued?

There’s no way any woman should allow herself to feel undervalued, but especially not somebody as beautiful, intelligent, loving and talented as you! You deserve nothing but the best! Dr. Gilda Carle, 30-Second Therapist on the Today Show, says it’s important to make sure the relationship is working for you, Selena.

“I think she can flirt with anyone she likes,” Dr Gilda says. “But any woman who agrees to be friends with benefits with anyone MUST decide what the benefits are for her! By flirting, is she trying to make Justin jealous? Games have no place in love. It’s not the flirting that I object to, it’s the general friends with benefits status.  Attention all women: Know your value, and don’t put out to fit in!”

I have to agree with Dr. Gilda — Selena, you deserve so much more than a friends with benefits relationship with a man that you have such strong feelings for. So if Justin truly isn’t ready for anything more than that, then you should just be friends with him and see what the future will bring. But for now, end the sexual aspect of your relationship with Justin because that will also allow you mentally to be more open to seeing the good in some other guys that you may meet!

Selena, it’s great that you’re at least flirting. This is a step in the right direction for you to enjoy a healthy dating life!

What do you think HollywoodLifers? Do you agree? Are you glad Selena is flirting with George? Do you think Selena should end her friends with benefits relationship with Justin? Let me know!