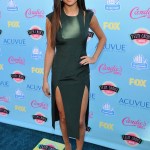 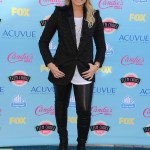 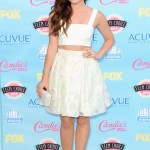 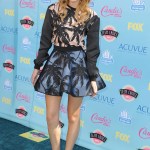 ‘The Vampire Diaries’ stars came together Aug. 11 to support their hit CW series — and they both looked amazing.

This year’s Teen Choice Awards red carpet might have been the most smolder-y yet, thanks in large part to the presence of Ian Somerhalder and Nina Dobrev! The stars of The CW’s The Vampire Diaries looked fang-tastic as they made their way down the carpet Aug. 11, turning heads and inducing wild screams from their fans.

Never one to waste an opportunity to look incredible, Nina had tongues wagging in a plunging floral jumpsuit. Ian, meanwhile, kept things more casual in a little black t-shirt. And in typical Ian fashion — pun intended, of course — the eco-friendly celeb’s ensemble drew attention to his organization, the Ian Somerhalder Foundation.

In fact, Ian’s shirt was actually an exclusive collaboration between the ISF and RYOT News, designed by The Vanity Project. The shirt will be available for purchase in late August, and proceeds will go to support both organizations.

“The Vanity Project has collaborated with over 40 non-profit organizations to raise awareness through fashion and innovative logo design,” according to the organization.

We love seeing Ian, 34, and Nina, 24, together — and we’re even more excited to see them back on The CW for the Oct. 3 season premiere of The Vampire Diaries!

Of course, Ian and Nina didn’t just attend the TCAs to look amazing — though they both accomplished that effortlessly. They were there to represent their hit CW drama, which was up for eight total awards!

(Whew! That’s a lot of nominations.)

Nina, Ian and the show all won in their respective categories, and we couldn’t be happier! Sadly, Joseph lost to Pretty Little Liars actress Janel Parrish, and Steven was bested by Glee‘s Chord Overstreet. Lastly, and definitely most surprisingly, Candice lost to Miley Cyrus for her recurring role on CBS’ Two and a Half Men.

HollywoodLifers, what did you think of Ian and Nina’s appearance(s) at the 2013 Teen Choice Awards? Drop a comment with your thoughts on the super-hot duo below.