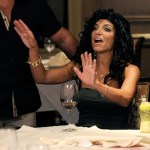 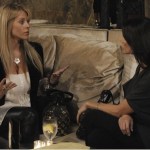 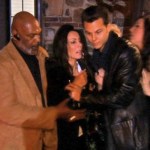 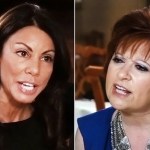 Teresa flips a table, Danielle’s hair extensions get yanked, the Gorgas feud at a christening, Melissa’s accused of being a stripper and more. ‘RHONJ’ has never had a shortage of epic fights. Browse through our gallery to see the 10 biggest fights ever.

A massive brawl erupted between Joe Gorga and Joe Giudice on the July 14 episode of The Real Housewives of New Jersey, but was it the biggest fight on the series ever?

‘The Real Housewives Of New Jersey’ — Biggest Fights Ever

I have to admit: I was a bit scared when Joe and Joe attacked each other at the family healing retreat, but I know I’ve felt this way many times throughout the five seasons of RHONJ. The table flip on the season one finale will likely go down as the most iconic moment in RHONJ history, but a lot of moments come pretty close in comparison. Take a look back at the biggest fights ever and tell us which altercation you feel is the biggest!

1. Teresa Giudice Flips A Table: The original RHONJ fight. While out to dinner, Teresa flips a table after Danielle Staub tells her to “pay attention puhlease” in regard to some questions Teresa was asking. Clearly, Teresa was not okay with Danielle’s attitude and slammed her hands down on the table, calling Danielle a “prostitution whore,” before deciding that the best plan of action was to flip a table over. (We approve, Teresa. We approve.)

2. Dina Manzo Confronts Danielle Staub: Before Dina left the series in season two, she made one last move — a one-on-one sit-down with Danielle. At the time, she told E! News, “The meeting was my closure. That was me telling her, ‘I want you out of my life. I’m leaving the show and all the opportunities that go along with because that’s how badly I need you out of my life.'” Dina returned to the series once in season four, when she attended Teresa’s Fabellini launch party.

3. Danielle Staub’s Weave Gets Pulled: In season two, Teresa and Danielle went at it again during a fashion show at the North Jersey Country Club in 2010, after Teresa tried to play nice, but Danielle wasn’t buying it. Jacqueline Laurita’s 19-year-old daughter, Ashlee Holmes, got involved in the epic fight, and ended up pulling out Danielle’s hair extensions. Cops were called, but no arrests were made.

4. Caroline Manzo Meets With Danielle Staub: In an effort to put all the drama behind them, Caroline tries to take one for the team and meets with Danielle. During the confrontation, Caroline lost her composure and called Danielle “garbage” and “a clown.”

5. The Gorga Family Feuds At A Christening: In the first episode of season three, we were introduced to Teresa’s brother Joe Gorga and his wife Melissa. When the families get together for the christening of Melissa and Joe’s son, Joey, with friends, family and even children watching, an all-out brawl erupts.

6. Melissa Gorga & Teresa Giudice Face Off: Teresa gets angry after Melissa says Joe Giudice might go to jail at a psychic party. Apparently, it’s not cool to say jail when you’re Italian. As Kathy Wakile suggests, it’s better to say “going away.” (We’ll keep that in mind.)

7. Jacqueline Laurita Confronts Teresa Giudice About Tabloid Stories: During season four, Jacqueline invited Teresa over for drinks, in the wake of her headline-making troubles. But Teresa didn’t respond well to the gesture and instead let Jacqueline have it. Suddenly, Teresa called Jacqueline a “psycho” and Jacqueline brought up Teresa’s Twitter exchanges with ex-Housewives villain Danielle. There were also some accusations about Teresa insulting sister-in-law Melissa. Then, Caroline arrived to join in the fun! Finally, Jacqueline announced that she was distancing herself from Teresa “for [her] health.”

8. Caroline Manzo Attacks Teresa Giudice In Napa Valley: During a vacation in Napa Valley, Caroline lets loose on Teresa and tells her she’s completely fake and needs some help.

9. Melissa Gorga Is Set Up By Teresa Giudice: Previously, Teresa made the allegation that her sister-in-law Melissa had once been a stripper, but the allegations came back into the spotlight at the Posche fashion show, when a guy claiming to be Melissa’s former strip-club boss confronted Melissa about her alleged past, and all hell broke loose. Teresa was suspected of setting the whole thing up, which only further infuriated her fellow Housewives.

10. Joe Giudice Vs. Joe Gorga: Teresa’s husband attacks her brother when Joe Gorga calls her “scum” at a family healing retreat. Ten years of built up feelings erupted on the July 14 episode of RHONJ.

Sadly, Teresa seems to be the common denominator in all of these fights. Perhaps there’s hope that she may find peace by the end of season five.

What do YOU think, HollywoodLifers? Take a look through our gallery and tell us which fight you think is the biggest!