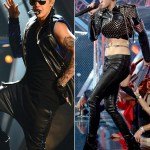 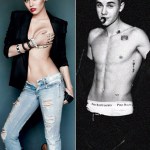 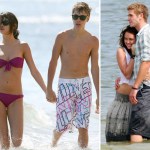 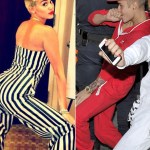 Two of our favorite celebrities are really getting a rough deal right now in a brand new poll that surveyed 2,407 parents from all over the country. They believe that Miley and the Biebs shouldn’t be looked up to!

Miley Cyrus and Justin Bieber are growing up but it appears their latest decisions are making American parents very happy. It turns out that these besties have topped a list of celebrities that parents don’t want as role models for their kids.

So here’s the deal. CouponCodes4u.com surveyed 2,407 parents from all over the country and it turns out that 58 percent believe celebs shouldn’t be role models. In the female category, Miley takes the cake of the worst role model with 68 percent, Lindsay Lohan is right behind, and then Kim Kardashian with 63 percent.

Justin didn’t top the list but he came in number three with 65 percent. Who topped the list? Chris Brown did with 71 percent and Kanye West with 67 percent.

What’s the reasoning for parents naming these guys as the worst? They believe that these female celebs are unable to make “positive life choices” and are “over-sexualized.”

When it comes to the guys, the parents cited their “arrogance” and “lack of fidelity” as reasons for being on the list.

We told you that on June 8, Miley and Justin were spotted at Beacher’s Mad House in LA and they were partying super late together. At one point they were even spotted “grinding.”

“Yeah, they did [dance together.] Miley can dance her ass off and Justin I’m sure had fun dancing with her. He grinded up against her a few times and people were laughing and Miley was like ‘Oh Wow.’ But it wasn’t anything serious, it’s just how everyone dances.”

We’re glad these two are friends but we don’t think they are bad role models. HollywoodLifers, sound off below and tell us what YOU think!