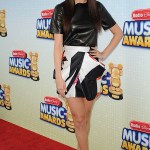 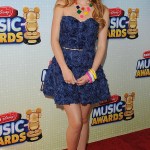 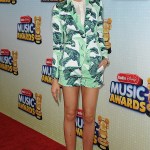 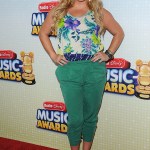 April 27 was a night for all those young music stars to get front and center for Disney and all the fans. Bella Thorne kept up her streak of being amazing, Cody Simpson looked super hunky, and even Denise Richards made an appearance on the red carpet. But obviously Selena stole the show. Keep reading to see our gallery of all the stars who walked the Radio Disney red carpet.

Selena Gomez and Bella Thorne were just a couple of the stars who wowed us on the red carpet for the Radio Disney Music Awards on April 27. Making their way into the Nokia Theatre in Los Angeles, Calif., a ton of celebs let their fashion and glamour flags fly.

Selena looked stunning in a black, white, and multi-colored skirt matched with a patent leather top by Bluemarine. That girl is so fierce these days!

Bella meanwhile brought some color to the red carpet in a luscious short purple dress. We were mostly impressed by her multi-colored accessories though — check out those shoes!

Speaking of color — how about Zendaya’s print jacket and short shorts outfit?

Denise Richards was the veteran at the awards show last night, but she hardly looked it. Her neon orange dress was vivid and youthful, and she looked SO ready for summer wearing it.

Ariana Grande, who hosted the show, looked like a flat out angel in her dress, which was long and flowing but also partly sheer. She topped it all off with a beautiful floral headband.

Don’t think we forgot about the boys! Blake Michael was looking super classy (though we’re not sure if we’re on board with his neck scarf), and obviously Cody Simpson was as cool as a cucumber in a sky blue button-down shirt.

Color — and lots of it — really was the theme on April 27. Who do you think was the best dressed, HollywoodLifers? Let us know!