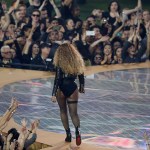 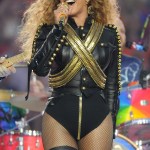 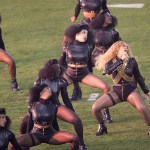 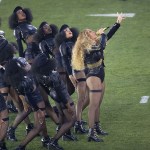 Wow! Beyonce will go down in history as giving the best halftime performance of all time! (Okay, I’m starting to sound like Kanye West.) But, it’s true!

Beyonce gave a show-stopping performance during the Pepsi Super Bowl halftime show on Feb. 3, where she reunited with Destiny’s Child and performed an entire medley of songs!

The show began with smoke, fans swarming the stage and fire shooting up everywhere!

Beyonce, 31, who wore a sexy leather getup, started her electrifying performance with “Crazy In Love,” “End Of Time” and “Baby Boy,” before she reunited with Destiny’s Child for a medley of songs that made them a household name.

Kelly Rowland and Michelle Williams reunited with Beyonce on stage during the halftime performance — shooting up from under the stage (so cool)! Though we already confirmed the ladies of Destiny’s Child would be there for the performance (We told you first!), it was still a shock to see Beyonce and the girls back together again!

The girls performed  “Bootylicious” and “Independent Women,” before they all sang Beyonce’s hit “Single Ladies.” As the song came to a close, Beyonce thanked the girls and asked the audience to “give it up” for them.

Beyonce then went solo again, finishing up “Single Ladies” by her lonesome. “Halo” then followed before Beyonce thanked the crowd for this moment.

Even though Beyonce said there would be a surprise announcement after her performance, Beyonce left the stage without saying anything about an upcoming tour or album.

What did you think of Beyonce’s halftime performance, HollywoodLifers?