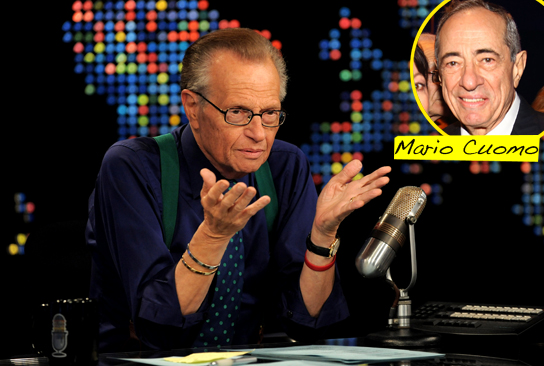 Larry tells us that his last show is going to start off the same way that his first one did, confides how he feels about successor Piers Morgan and weighs in on the rumors he’ll be working with Ryan Seacrest!

After more than 25 years and 40,000 interviews on Larry King Live, Larry King is finally ready to step down from his hosting duties and pass the torch to successor Piers Morgan. But before he goes, the 76-year-old broadcast interviewer plans on giving his CNN talk show a bittersweet, nostalgic ending!

“[My final interview] is the same person I started the show off with,” Larry told HollywoodLife.com exclusively at the Brent Shapiro Foundation event in Beverly Hills, Calif. Sept. 11. “[It will be 52nd Governor of New York] Mario Cuomo, the first guest 25-and-a-half years ago. We’re flying him out to LA to do the show.” The final show date: December 16, 2010.

As for handing the reigns over to America’s Got Talent judge Piers, Larry is all for the changeover! “I like him very much,” he revealed. “I wish him nothing but the best – he’s going to guest on my show in October. I want him to do well. It’s funny, my wife met him before I did, at a Dodger game.”

As for those rumors that Larry may be joining KIIS FM host Ryan Seacrest on the radio — well, those rumors may just be true! “There’s nothing for sure YET,” he acknowledged, adding, “Ryan and I have a lot of fun. We get along great. We have a lot of laughs. He’s a great guy – we’re very close.”

So watch this space, BFFs…